The Real Cost Of Toxic Employees

Rock Star employees make a huge positive impact and help to increase the valuation of the business.

That’s why finding a Rock Star is the goal of every hiring manager.

But is that really a good strategy?

Should organizations be focused on the positive? (i.e. finding the Rock Stars)

Or are they better served trying to avoid the negative? (toxic employees)

This article is part of a series that is dedicated to exploring the contribution of human capital assets (people!) to the valuation of a business. If you’re just joining us, welcome to The New ROI: Return on Individuals.

In this article we explore “the dark side” and discuss the real cost of toxic employees.

It’s All About THEM

When we talk about toxic employees, we’re talking about more than just a distracted employee who is perhaps spending some time at work on Facebook; or a disengaged employee who’s perhaps spending too much time at work on CareerBuilder looking for their next job. We’re talking about the employees who are actively trying to get their colleagues to disengage, or worse.

Toxic employees don’t care about a company’s goals, nor do they care about building relationships with co-workers. More than just self-centered office bullies, toxic employees are actually strategic and covert.

A recent study by Michael Housman and Dylan Minor published in the Harvard Gazette defines a “toxic” employee as:  “a worker that engages in behavior that is harmful to an organization, including either its property or people.”

The data suggests that toxic employees drive other employees to leave an organization faster and more frequently, which generates huge turnover and training costs, and they diminish the productivity of everyone around them.

To gain some additional insights behind the research, I spoke with co-author, Dr. Michael Housman. According to Dr. Housman:

“Behavior is contagious… we find that when a toxic person joins a team, others are more likely to behave in a toxic fashion.”

Although not part of the Harvard study, Minor was quoted as saying: “Client-customer surveys indicate that toxic workers “absolutely” tend to damage a firm’s customer service reputation, which has a long-term financial impact that can be difficult to quantify.”

The Harvard Study also estimated the value of finding a “Rock Star” – defined as workers in the top 1% of productivity, as compared to the value of avoiding a toxic worker.

According to the findings, by avoiding the hiring of a toxic employee, companies will save an average of $12,489 through the avoidance of potential litigation fees and avoiding a reduction in employee morale, among other other things. 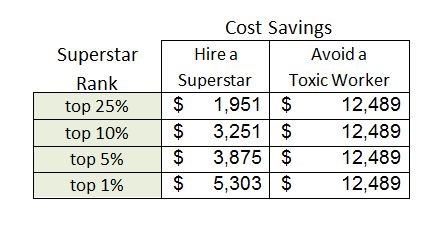 The findings show that avoiding a toxic employee generates returns of nearly two-to-one as compared to those generated when firms hire a Rock Star.

This suggests more broadly that “bad” employees may have a stronger effect on the firm than “good” employees.

To further my understanding of the impact of toxic employees, I visited with Candida Seasock, founder of CTS & Associates. Candida has successfully assisted management teams ranging from Fortune 500 corporations to emerging growth companies through her award-winning approach “Growth Path to Success.”

According to Candida, companies make the mistake of hiring potentially toxic employees by not focusing on hiring to fit corporate culture. “Skills can be taught or developed, but honesty and integrity are found from within” she says.

Candida also warns that some of a company’s earliest hires might not be the best fit as the company grows. “Holding on to employees who are resistant to change and growth, can result in toxic behaviors as those employees try to survive,” she says.

This can be a costly mistake.

According to this article by Jeremy Goldman in Inc., the cost of keeping the wrong person can be up to 15 times their annual salary. 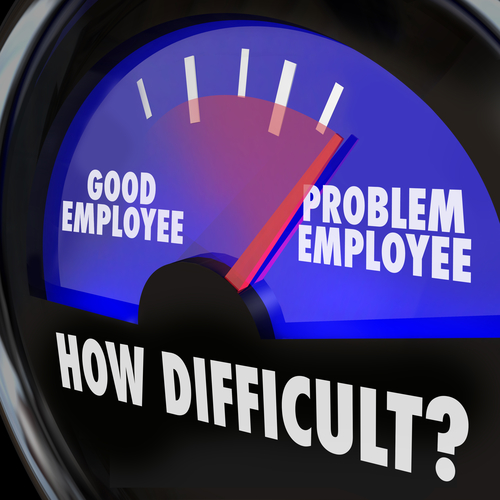 The impact to the company includes the following:

(Is Sheldon Cooper of The Big Bang Theory toxic?)

The fact that toxic employees are costly to the firms that employ them isn’t really much of a shocker, but there is a little bit of irony that is derived from the research. Specifically, the Harvard Study also found that:

Toxic employees are much more productive than the average employee

Dr. Housman notes, however, that “while toxic employees are more productive, meaning getting more things done, the quality of that productivity often is less than desirable.“

Organizations are often confronted with the situation where they need to decide whether to terminate a high-performing toxic employee for the betterment of the team’s morale. How many are able to do that, as compared to looking the other way because the employee’s “numbers were just too good?”

Candida says that “the toxic employees are top performers because they’ve literally become know-it-alls. As a result of their behaviors, they pick up valuable pieces of information along the way.”

But these behaviors can only be tolerated up to a certain point.

Presented with the apparent correlation of high productivity among the toxic employees, the Harvard researchers explicitly examined the trade-off in increased productivity vs. the propensity for toxicity.

As it turns out, avoiding toxic workers is still better for the organization in terms of net profitability, despite losing out on a highly productive employee.

What role does management play in creating or fostering a toxic environment? According to Dr. Housman, even when management teams are not contributing to the toxic behaviors, he says that:

“By not policing toxic behaviors, management can create an environment where people feel that they can ‘get away with’ behaving badly.”

Clearly it’s best to avoid hiring a toxic employee in the first place, but if you’ve got them in your midst, Candida recommends that the toxic employee either needs to be terminated or isolated.

For management teams that just can’t give up the high performance, Candida emphasizes the need to “recognize the toxic behavior and separate the toxic employee from the rest of the workforce by letting them focus on what they’re really good at.”

But at some point, the toxic behavior outweighs the high performance.

Afraid to cut the cord? Wondering if removing a toxic “superstar” really pays dividends? Here’s an example of a Philadelphia-area company that proves it.